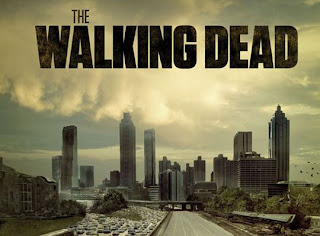 I don't watch much television. We're just too busy to follow programs regularly and too cheap to invest in DVR or Tivo (yes, we're old school). So rather than get hung up on a show, I tend to ignore most of them. However, there are exceptions (RIP, Lost!)...Sons of Anarchy, Revenge and Community (when it's on) tend to be on my radar. And more recently, I've become a huge Walking Dead fan. Any other zombie fans in the house? If so, did you see last night's episode?! OMG!!! Talk about a shocker. Major character deaths AND a plotline revelation/game-changer. Can't wait to see next week's season finale, which the creator promises will be "complete and utter chaos." Woo hoo!
Along those lines, a friend has offered to host a season finale viewing party. Reminds me of the old days, when friends would gather every Sunday to watch The Sopranos, while drinking wine and chowing down on pasta. We've all been asked to bring some themed dishes to share, so I plan to whip up at least one or two of the awesome and creative apps mentioned on this blog. I will also be making these sugar-free red velvet "insanity" cupcakes courtesy of Hungry Girl. Should be a spooktacular time!
Posted by Katie at 8:13 PM