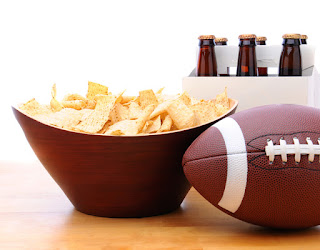 Unless you've been living under a rock, you know what's coming up on Sunday. It's the national holiday of sports - Super Bowl Sunday. As a major football fanatic, I'm typically glued to the tube every weekend heading into February. And the Big Game is no exception...except for maybe this year. I'm feeling a whole lot of "meh" about Sunday's showdown. I guess I'll half-heartedly route for San Fran, since Jimbo used to play for my beloved Bears and the 49ers are the NFC reps. Otherwise, color me bored.  Plus, I'm not overly excited about the half-time routine and the Super Bowl ads in recent years have been snoozers.
All that being said, I will still join friends (at least for the first half) in watching the game. It's the patriotic thing to do, right? But like the rest of the US nation, I'll be tempted by platters of buffalo wings, chips and dip, burgers, pizza and all sorts of other high-cal food options that seem to accompany Game Day. According to research by the Calorie Control Council (CCC) and Snack Food Association, Americans will eat 30 million pounds of snacks on Sunday. That breaks down to 11.2 million pounds of potato chips, 8.2 million pounds of tortilla chips, 4.3 million pounds of pretzels, 3.8 million pounds of popcorn and 2.5 million pounds of nuts.  The average armchair quarterback will consume 1200 calories and 50 grams of fat from snacking, which DOESN'T EVEN INCLUDE THE MEALS! Holy drawstring pants, Batman! This game is clearly tough on calorie counters. Fortunately, there are a few tricks to cut down on the fat while rooting for your favorite team.

* Fat-free is good. Choosing fat-free potato chips for the big game could save up to 300 calories per person. When it comes to dips, try salsa or substitute reduced-fat sour cream and non-fat yogurt. Use fresh herbs and spices such as cilantro, parsley and hot peppers to add great flavor. Add fresh vegetables and low-fat dips to your party tray and you’ve got a healthy appetizer in no time.
* Exercise. Try hitting the gym before going to the big party. If that's not feasible, help burn off Super Bowl snacks by tossing the football with friends at halftime or walking to a neighbors house to get a play by play.
* Don't show up hungry. Try to eat a healthy, well-balanced meal - or even a light snack - before chowing down on higher-fat foods to help curb the appetite.
* Drink in moderation. For every beer you have, drink a glass of water since alcohol tends to dehydrate you. Also, if you're truly worried about the carbs or calories in your cocktail, drink light beer or vodka with diet soda. On average, you'll save about 35 calories per beer bottle switching to the lighter version.

And check out the Calorie Control Council's appetizer recipe section to find a list of healthy spreads and dips perfect for the Super Bowl party.

As for me, I'm just excited about the Puppy Bowl. How freakin' cute are those peanuts?
Posted by Katie at 9:23 PM